The National Association of City Transportation Officials (NACTO) created the Urban Bikeway Design Guide. It is part of the      Cities for Cycling Initiative. The purpose of the guide is to provide cities with state-of-the-practice solutions that can help create complete streets that are safe and enjoyable for bicyclists.

The designs in this document were developed by cities for cities, since unique urban streets require innovative solutions. Most of these treatments are not directly referenced in the current versions of the (AASHTO) Guide to Bikeway Facilities, although they are virtually all (with two exceptions) permitted under the Manual on Uniform Traffic Control Devices (MUTCD). The Federal Highway Administration has posted information regarding MUTCD approval status of all of the bicycle related treatments in this guide and in August 2013 issued a memorandum officially supporting use of the document.

All of the NACTO Urban Bikeway Design Guide treatments are in use internationally and in many cities around the US.

The intent of the Guide is to offer substantive guidance for cities seeking to improve bicycle transportation in places where competing demands for the use of the right of way present unique challenges. Each of the treatments addressed in the Guide offers three levels of guidance:

As of April 2014, The California Department of Transportation (Caltrans) officially endorsed the NACTO Urban Street Design Guide and Urban Bikeway Design Guide as valuable toolkits for designing and constructing safe, attractive local streets. This endorsement, which Malcolm Dougherty announced at NACTO’s Cities for Cycling Road Show in Oakland, is a landmark policy decision that catapults the agency forward as a national leader on designing streets to accommodate all users. 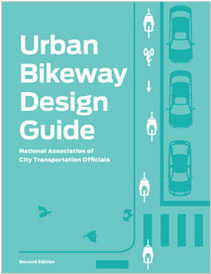