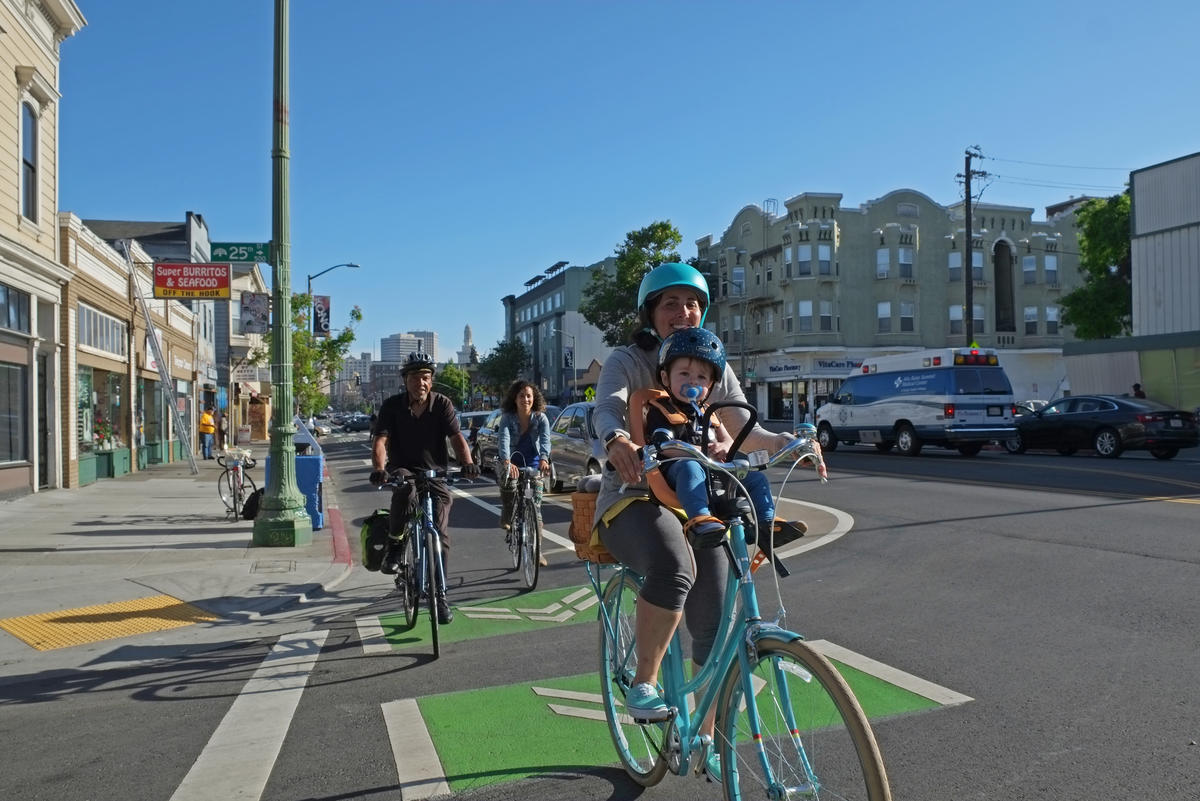 For this installment of Stories from the Field, SafeTREC Policy and Program Analyst, Ali von Klan, sat down with Dave Campbell,  Bike East Bay's Advocacy Director. Campbell talks about his decades-long of advocacy work promoting bicycling for transportation in the Bay Area and the importance of trust, relationship-building, and maintaining expectations during the planning and design process.

Interview condensed for length and clarity.

AVK: Let’s start by having you describe Bike East Bay and your role within it.

DC: Bike East Bay is a bicycle advocacy organization formed in 1972. My predecessors got together and formed the coalition to get bike access on BART, and that’s how we were born and we’ve been at bat ever since.

Bike East Bay works on a whole variety of things in Alameda and Contra Costa counties: infrastructure, policy, education, promotion, community engagement, and funding issues to make cities more bike-friendly. We work with any number of regional agencies to improve bicycling, walking and transit-riding, while also engaging at the state level and sometimes at the national level.

I focus on our policy work [seeking to] change the laws, regulations, cities’ policies on various things, [including] funding mechanisms. When a city, county, region, or the state wants to increase taxes, tolls, or fees for a transportation program, we are very engaged in making sure that a fair share of new funding goes to promote active transportation.

AVK: What inspired you to work in active transportation?

DC: Well, when I moved to Berkeley in 1996 I owned an SUV and had lived in suburban locations around the country. Berkeley was the first time I lived in a non-suburban neighborhood and I immediately hopped on my bike to get around town. It just seemed so natural.

I didn’t live that far from BART, so I’d walk to BART to get to work. I was practicing law at the time and got introduced to Bike East Bay at a transportation fair and they invited me to come to one of their meetings. They seemed to be doing interesting things and through them I learned about the Bicycle Friendly Berkeley Coalition, a local bicycle advocacy group in Berkeley.

This was back when Critical Mass was becoming a big deal, and we were still having conversations with decision-makers: “Is bicycling a good thing?” And twenty years ago, some people weren’t convinced. That’s one thing that has changed now. Everyone seems to be convinced bicycling is a good thing.

AVK: How does Bike East Bay encourage safety for people that walk, bike, or roll for transportation?

DC: Well, I’ll start with the things I’m not directly responsible for. We have free bicycle education programs to educate people on how to ride a bike, use a bike out on busy streets, ride with kids, use a cargo bike, lock a bike properly, and use a bike with transit. We also promote bicycling [through] lots of events, including Bike to Work Day and Bike to School Day--our biggest event to raise awareness of bicycling as a commute alternative.

The work I do is mainly [related to] infrastructure and policy, overseeing efforts to redesign streets and redesign transit, giving people safe, comfortable and enjoyable options to use their bike, walk and use transit. And, as the landscape changes, we need to redesign our streets to accommodate micro-mobility devices cropping up everywhere, including bikeshare, scootershare, and other [electrically-powered] devices showing up in bike lanes and sidewalks.

AVK: And, what are the key elements of a successful active transportation plan or program?

DC: Trust is certainly a big part. We spend a lot of time building good relationships with people in any number of ways. Because we have two counties, thirty-three cities, and 2.5 million people, I can’t knock on every door and talk to everyone endlessly about each project. I need to rely on other people who are community leaders and elected officials to support the work that we do.

With thirty-three cities, one advantage I have is that if one of my cities is doing something cool and another one of my cities doesn’t know about it, I can tell them about it. That’s my job; it’s not necessarily the other city’s job to know what the other thirty-two cities are doing, or even know what cities around the country are doing. I can let [city leaders] know, “Here is a solution to a problem that you are facing. It was tried in this other city and it was successful.” It allows us to connect the dots in some kind of way.

And similarly, when a city says, “No, we can’t do that because the rules that we operate under don’t allow us to do that,” I can tell them, “Well, this other city found a way around those rules. Let’s work together to find a way around that rule for you.” That way, each city is lifted up by the good work of other cities.

AVK: Now, think back to a recent active transportation safety project or program, what are some valuable takeaways gained from that experience?

DC: Six years ago, Oakland was planning pedestrian, bicycle [and transit] improvements on Telegraph Ave. There’s two business districts along Telegraph: the Temescal District above Macarthur Freeway and the KONO district below the Macarthur Freeway. The Temescal District has been a more economically successful business but less diverse than the KONO District. In contrast, the KONO District was a more diverse business district, but struggled economically. KONO had a lot of businesses closing and empty storefronts, so they were more willing to consider a change to their street more people-oriented.

If you had a business in Temescal or KONO, we knocked on your door and provided you with information about the project and directed you to surveys or public meetings [where] you could provide input directly. And we did this repeatedly.

I think we were getting close to having a majority of at least the board of directors of the business district to agree to change the street, take away a travel lane, and add a bike lane. We got about fifty or so businesses to actually sign our petition saying, “Yes, I want to change our streets. I want to lose a lane, add a bike lane and I understand that this is going to reduce the on-street parking in our district. I understand that.”

Eventually, the KONO business district board of directors were leaning towards making the change. We were at their meetings all the time, not just being an advocate for that street change project. If they had other concerns, sometimes it was helpful for me to say, “Oh, this other concern you have, I know who you need to talk to.” And they appreciated that. So, it’s really just constant relationship-building with the key decision-makers.

One lesson for other cities that are doing their first major complete streets redesign is to pick the right project that the city can deliver, or that they are committed to delivering. Don’t pick something that is too big and beyond their resources, commitment.

In 2016, protected bike lanes were installed in KONO and last year approved for all of Telegraph.

AVK: Finally, if you had a superpower and could change anything, what would the future of active transportation safety look like?

DC: If I had a superpower...it would probably be something like a street that has no cars, just people walking between destinations that are all within a short walk.

This story is part of the Stories from the Field Series, where we share stories of successes, lessons learned, best practices and tools for promoting safe active transportation throughout the state of California. It is a great opportunity to share your own experiences with others what works and to learn from one another how to encourage safe and active travel.

This Stories From the Field interview was conducted in collaboration with UC Berkeley SafeTREC. The opinions and perspectives expressed are those of the interviewee and not necessarily those of SafeTREC.