"We wanted to use the opportunity to help pave the way in the city for a new sort of ground-up, participatory, and iterative street improvement process."

For this installment of Stories from You, we're excited to feature a story from Russell Toler, Founding Member of the Costa Mesa Alliance for Better Streets (CMABS). Russell helped form CMABS about a year and a half ago with some like-minded neighbors when he realized that things were not going to get better without a large, concentrated effort. Since then he and the rest of the CMABS team have been busy trying to build local momentum for the cause for safer streets.

The Costa Mesa Alliance for Better Streets is a community-based nonprofit that seeks to advocate for and help realize a better use of our public space - the streets. This last spring, we became aware of mini-grants being offered by the Southern California Association of Government’s “Go Human” campaign, and actually secured one to use here in Costa Mesa. The aim of the mini-grants is “to build street-level community resiliency and increase the safety of vulnerable street users.” We brought city staff and leaders into the discussion early on, and met with them to determine an appropriate location of focus. This ended up being West 19th Street - a commercial strip that runs through the part of town that is designated by the State as “disadvantaged.” What made this street low-hanging fruit for such a project is that, more than anywhere else in the city, it is where people are already trying to walk and bike to get around.

We spent about a third of our grant funding on outreach: we wrote and sent a survey to every household within ¼ mile of the project area. The questions were both multiple choice and open-ended, and sought to understand what the community thought about W. 19th in terms of comfort and safety, and how they thought it might be improved. If this project included nothing but the feedback gained from the survey, it would still be a success. People were very thorough in their responses, and nearly unanimous in what the issues were. Up at the top of the list of what people were concerned about was “speeding and aggressive driving.” 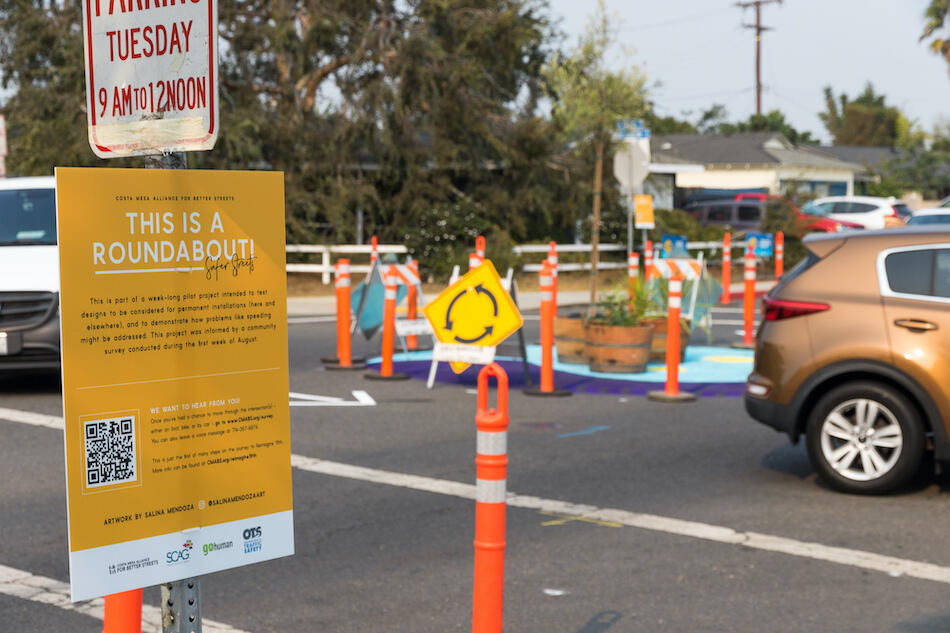 We were interested in doing a traffic-calming demonstration project in response to the community feedback. The project would be an instance of tactical urbanism (wherein a traffic-calming or place-making design is tested with inexpensive, temporary materials). In our discussion with city staff, we learned that removing a lane of traffic (to put in a pop-up protected bike lane for example) would require more time and energy than we had. The same was true for crosswalks. But bulbouts, which tighten corner radii and slow turning drivers and shorten pedestrian crossing distance, and traffic circles would be possible.

The final project, in all its glory, ended up being two mini traffic circles that stayed up for one week. The first was at 19th St. and Monrovia Ave., which is a large multi-lane, stop-controlled intersection. The second was at a smaller neighborhood intersection around the corner that is normally only a two-way stop. We brought local artist Salina Mendoza onto the team, who used spray chalk to make asphalt murals in the middle of both circles. We added cones for the circle perimeters and for bulbouts at each corner. Finally, we added plants in wine-barrel planters inside the circles.

Neighborhood traffic circles are primarily intended to force drivers to slow down and pay attention at the intersection. And although many American drivers are unfamiliar with how they function, they reduce the number of conflict points from 32 to 8 (compared to a 4-way stop), and reduce the speed at which any conflicts might occur.

The intent behind these interventions was two-fold. First we wanted to use the opportunity to help pave the way in the city for a new sort of ground-up, participatory, and iterative street improvement process. This project got all the parties involved more familiar with each other, so that future projects might be even easier. Secondly, we wanted to demonstrate to the community how relatively simply and inexpensively we might test ways to improve street conditions.

On the last night of the project, we had a high school mariachi band play at one of the corners facing the intersection. Passersby stopped at the other three corners to watch the show and enjoy the music. With the slower car-traffic, the music, more people than usual, artwork and vegetation in the center of the street, the whole intersection had started to feel like a place to be, rather than a place to just get through. We hope that the point - that our streets can be better - was not lost on people. 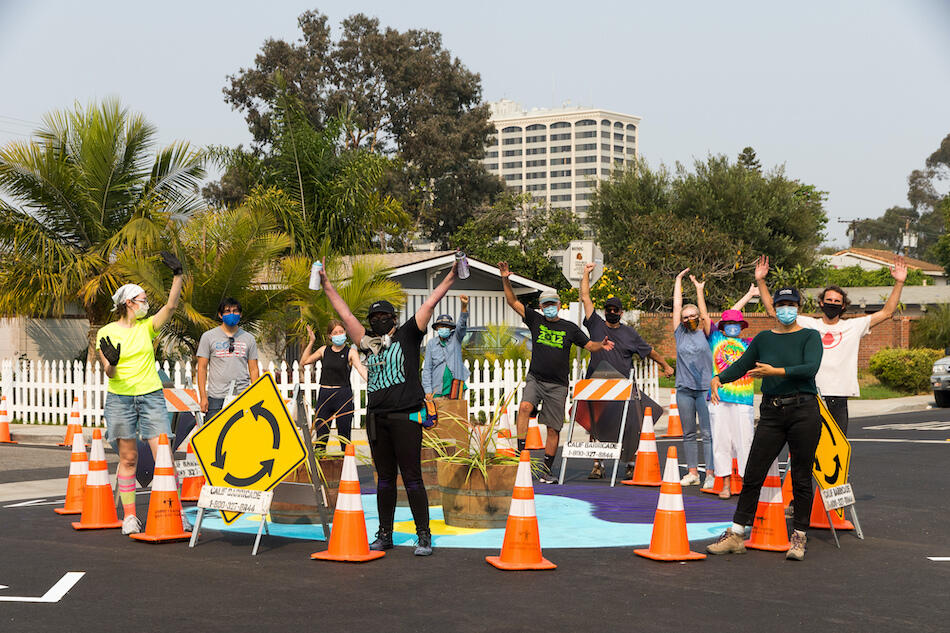 The project was ultimately not about traffic circles, or even about the specific intersections chosen. ​It was about figuring out - together with city staff and the broader community - how we might make our streets safer, and how we might do so efficiently and effectively​. This project forced us all to go through the entire process of a community-led project, and in doing so, opened that door for Costa Mesa. Because change can be difficult for some, we know that this is an uphill battle - but we believe that it is one necessary to fight, both for those of us here today and those who will be living in our city for generations to come.

This Stories From You was coordinated in collaboration with UC Berkeley SafeTREC. The opinions and perspectives expressed are those of the author and not necessarily those of SafeTREC. 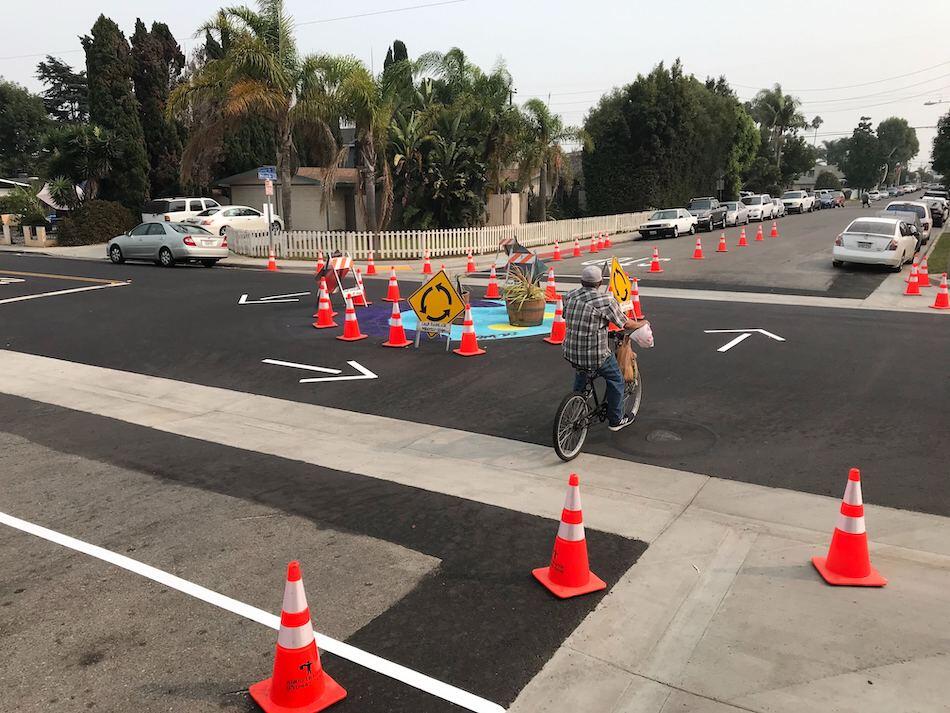